ITTA BENA, Miss.— The Fall 2019 Commencement marked the ending of one chapter and the beginning of another for Mississippi Valley State University graduates Saturday.

“A book is comprised of several chapters which legitimatizes that book, and that’s the same way with life. Our lives are full of chapters,” said MVSU President Dr. Jerryl Briggs, who served as the commencement speaker. “Now, you all are about to fulfill another chapter, and with that chapter comes accountability and responsibility.”

Briggs, who typically presides over the ceremony, said he was honored to serve as the speaker for the special occasion.

The ceremony, hosted at 10 a.m. in the R.W. Harrison Complex, marked the reinstatement of the University’s Fall Commencement Exercise and the inaugural fall graduation ceremony under the institution’s current administration.

“As you go forward, you all will have several other chapters in your lives, but always remember this one as important,” said Briggs to the graduates who received both master’s and bachelor’s degrees.

Recounting his own life’s chapters, Briggs said he wouldn’t be standing where he is today if it wasn’t for other’s who paved the way for him.

“I want to give thanks to all of our ancestors and to all of those who have made a difference in our lives today,” he said. “I’ve sat in the chair that you all are sitting in now. One very special person in my life was my mother. She passed in 2005, but I know she’s standing here with me now.” 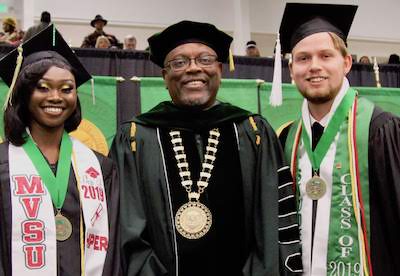 Reading a quote from a commencement speech given on Dec. 6, 1953, by MVSU’s Founding President Dr. James Herbert White, Briggs encouraged the graduates to continue to embrace the commitment to service instilled in them during their time at The Valley.

He also reminded them of the gravity of what they’ve accomplished by both earning a degree and receiving an education.

“Getting a degree is very important, but receiving an education is most important,” he said, “We know that it’s education that transforms lives, communities & societies.”

Briggs closed by encouraging the Class of 2019 to share their experiences, knowledge, and love for MVSU with the world.

“Whatever your next chapter entails, remember that part of that preparation started here, at Mississippi Valley State University, and don’t let anyone lessen the importance of that opportunity and the degree that you’re receiving.”