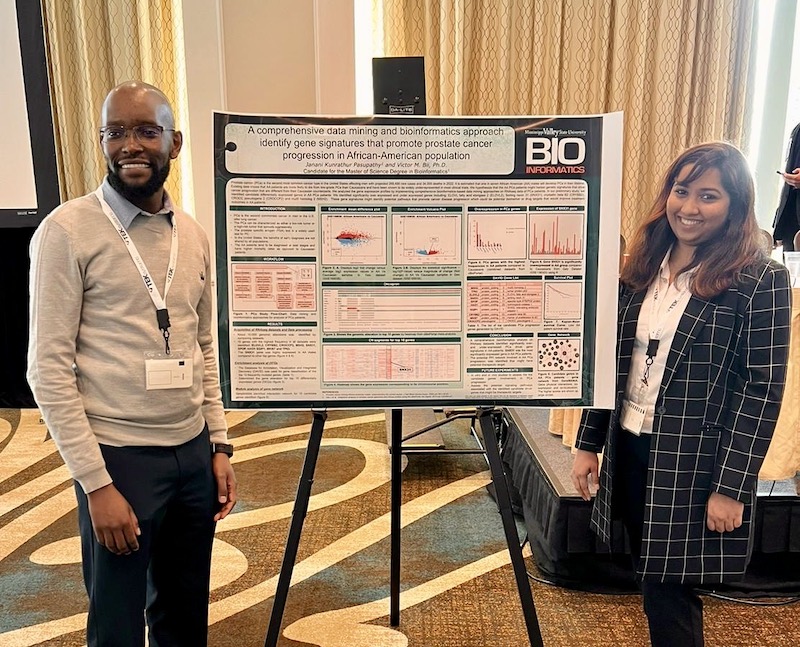 Janani Kunrathur Pasupathy, of Chennai, India, and Jasmine Wallace, of Greenwood, have been given research opportunities that opened the door for new research interests and networking options through the Mississippi Valley State University Bioinformatic graduate program.

Wallace is scheduled to graduate from MVSU in May of 2023. Pasupathy completed her second Master of Arts degree in Bioinformatics on December 10, 2022, from MVSU. On December 15, 2022, Pasupathy began her job at Winship Cancer Institute of Emory University in Atlanta, GA as the Bioinformatic Analyst.

In November, Pasupathy presented her research at the 9th Healthcare Information and Management Systems Society (HIMSS) Conference in Baton Rouge, LA. In addition, Wallace was one of ten American students selected to participate in the Invasion and evolution—Evolutionary, phylogenetic, and genomic mechanisms and consequences of plant-fungal invasions in invasion biology international graduate course, which was held in Pretoria, South Africa, from October 30, 2022, through November 19, 2022.

Pasupathy was informed of the conference by her professor, Dr. Victor Bii, Assistant Professor – Bioinformatics.

Although she was ecstatic to be accepted into the conference, she was concerned about her acceptance status when it arrived after its expected date. 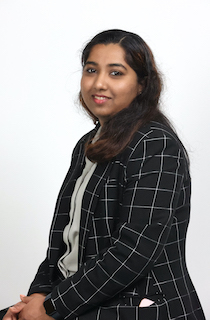 "I applied to the conference by submitting my abstract to their website. Initially, I did not get a response on whether I was accepted, so I decided to contact them. After reaching out to them, they emailed me back to confirm my acceptance and apologized for the delay. Moreover, they said my abstract looked so good that they wanted to view the poster for it," said Pasupathy.

Pasupathy registered online to present her project while she attended the event. She presented findings from her research via a poster entitled, "A comprehensive data mining and bioinformatics approach to identify gene signatures that promote prostate cancer progression in the African-American population."

After presenting her presentation, Pasupathy was astonished at how interested the audience was in learning more about her research and findings.

"When I presented my poster, everyone was so impressed with the poster that they asked so many questions. I could answer them because my professor (Dr. Bii) had prepared me for questions people might ask. He was very supportive of me throughout this entire process," Pasupathy explained.

According to Wallace, Dr. Bii informed her of the opportunity and insisted she apply. In the beginning, Wallace is hesitant because she thinks she does not qualify, but Dr. Bii and her uncle, Dr. (Antonio) Brownlow, convince her otherwise.

"I was convinced of how it would be an amazing opportunity. I thought about it and realized the worst response I could get is "no," so I decided to apply. A week later, I received an email that I was accepted," said Wallace.

"We were in the Cruger National Park to find and identify different animals. During that time, I witnessed an elephant begin to give birth. We saw when her water broke and how she walked to the waterhole but could not make it. So they had us leave while they assisted her in 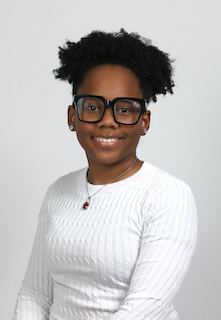 After completing their time at the Cruger National Park, the group moved to Sabie, where they met a company named York Timberland that owned power forestry. There, they were taught more about invasions and their impacts.

"We were learning about invasions and whether they have a neutral, positive, or negative impact. Then, we went to three different pine sights to collect root samples and seedlings. After collecting them, she added that we had to wait a couple of days to do the lab work in Pretoria," she added.

Although Wallace spent a bit of time exploring the forest or in the lab, she was able to put down her lab coat and explore Africa.

"We ate lunch at the Botanical Gardens one day. Then, on another day, we went to a shopping mall, one of my favorite places we visited," Wallace said.

Wallace explained her happiness for taking a chance on the program because she was able to expand her knowledge on fungi and met amazing people in the process.

"I learned how important fungi was for the tree roots by transporting nutrients from the roots to the tree. Some people were more familiar with fungi because that was their study path," said Wallace.

She continued, "Because they knew some things I did not, I knew it was important to collaborate and network with the students. So we decided to have monthly meetings via Zoom to keep in contact."

Through this experience, Wallace said she was allowed to complete her Ph.D. in Africa but may have other plans after graduation.

"I had the offer to complete my Ph.D. in Africa, but I don't know if I'm ready to pursue a Ph.D. Once I graduate, I am interested in becoming a biostatistician or a medical writer," said Wallace.