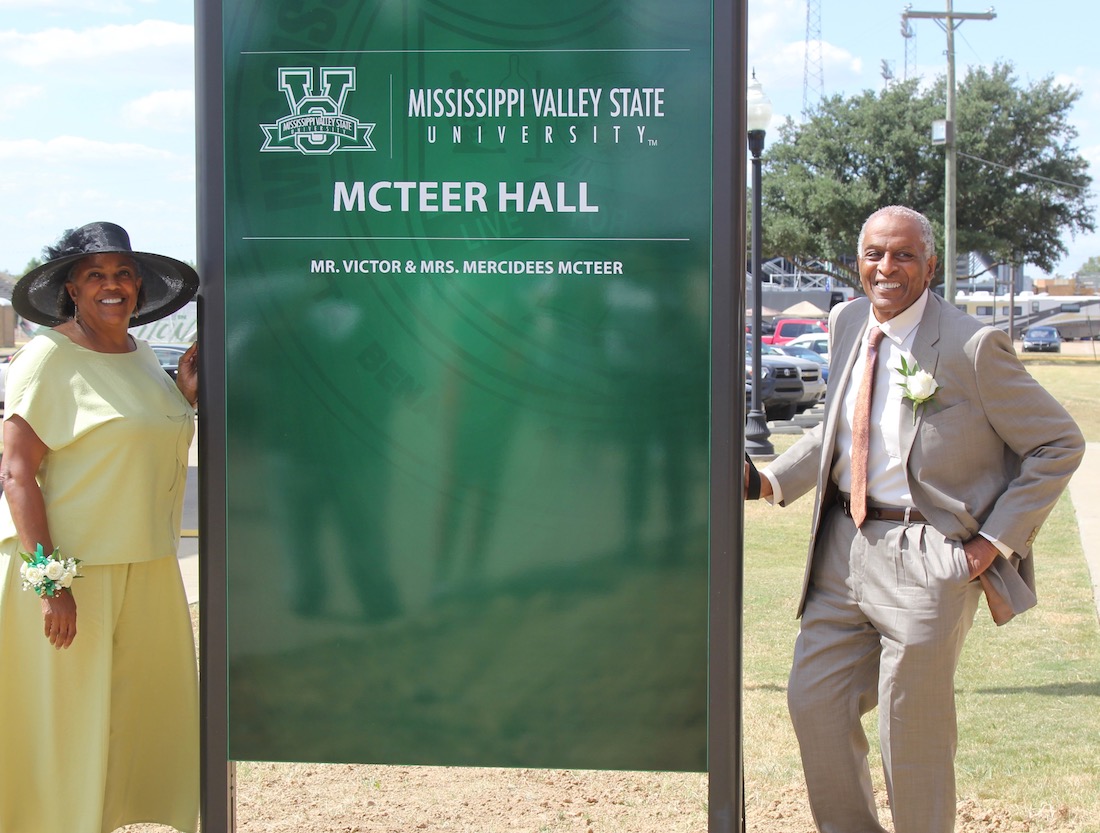 ITTA BENA, Miss.— “We did it because it was the only logical thing we could think to do,” said a poised Victor McTeer, revealing his motivation for providing financial support over the past several years to the state’s Historically Black Colleges and Universities (HBCUs), including Mississippi Valley State University.

MVSU paid homage to McTeer and wife, Mecidees, Saturday for their generosity by re-naming its New Men Residence Hall to McTeer Hall. The 25,473 square feet dormitory was constructed in 2006 and has a student bed capacity of 96.

Before unveiling the new marker and plaque bearing the McTeers’ name, MVSU President Dr. Jerryl Briggs stated that the occasion was a special one for the MVSU community.

“I want to take the time to say thank you personally for all that you have meant to this university. You all have done tremendously great things for us, and we want to make sure that your legacy will continue,” Briggs said to the honorees.

McTeer, a retired civil rights attorney, said the occasion was a special one with this past July marking the 50th anniversary that he and his wife relocated to the Mississippi Delta from Baltimore, Maryland.

“I never dreamed I’d see anything like this. As a matter of fact, the only thing I remember about that first year was that I wanted to get out of Mississippi so fast,” he chuckled.

McTeer then acknowledged his wife, an accomplished public-school educator, whom he said stuck by his side even after he announced such an implausible decision.​

“She had to give up her dream job in Baltimore as a second-grade teacher. I was making a third of what I’d been offered in New York and Baltimore, and she was going to earn just $7,000 in Mound Bayou. As long as I promised her that we would be gone in two years, she went with it. Well, we all know how that worked out,” he said.

Looking back on his career, McTeer said he feels indebted to those who trusted him to represent them—even when it could’ve cost them their lives.

“People heard this story about this young black guy from Baltimore who’d come to Mississippi, and they gave me a chance. But it just didn’t happen once. It happened over and over again,” he said. “I felt, as did Dee (Mecidees), that we had to do something.”

Initially, the couple started the McTeer Foundation, ran by their daughter Heather, to help college students from the Mississippi Delta pay for the first two years of college.

“We did that for a while, and it worked well, but it still wasn’t enough. We decided that we wanted to take another step. That’s when (Attorney) Fred (Clark) came to me. We’d been working on a couple of cases and done unbelievably well. Fred said, let’s do something special, something unheard of.”

“It was easy for me—my home college in Mississippi is Mississippi Valley State University. Part of that was also because (MVSU alum Attorney) Carver (Randle, Sr.) was one of my best friends in life,” he explained.

Over time, the two continued to support their selected schools while also making contributions to other schools.

“We figured that we had to give back as much as we had been given and as many times as we could give back, and that’s exactly what we did,” he said.

McTeer said that the naming of McTeer Hall is a very touching gesture.

He concluded his remarks by adding his spin to a popular phrase.

“What goes around comes around, and for us, it has been blessings.”

Click HERE to view more photos from the event!