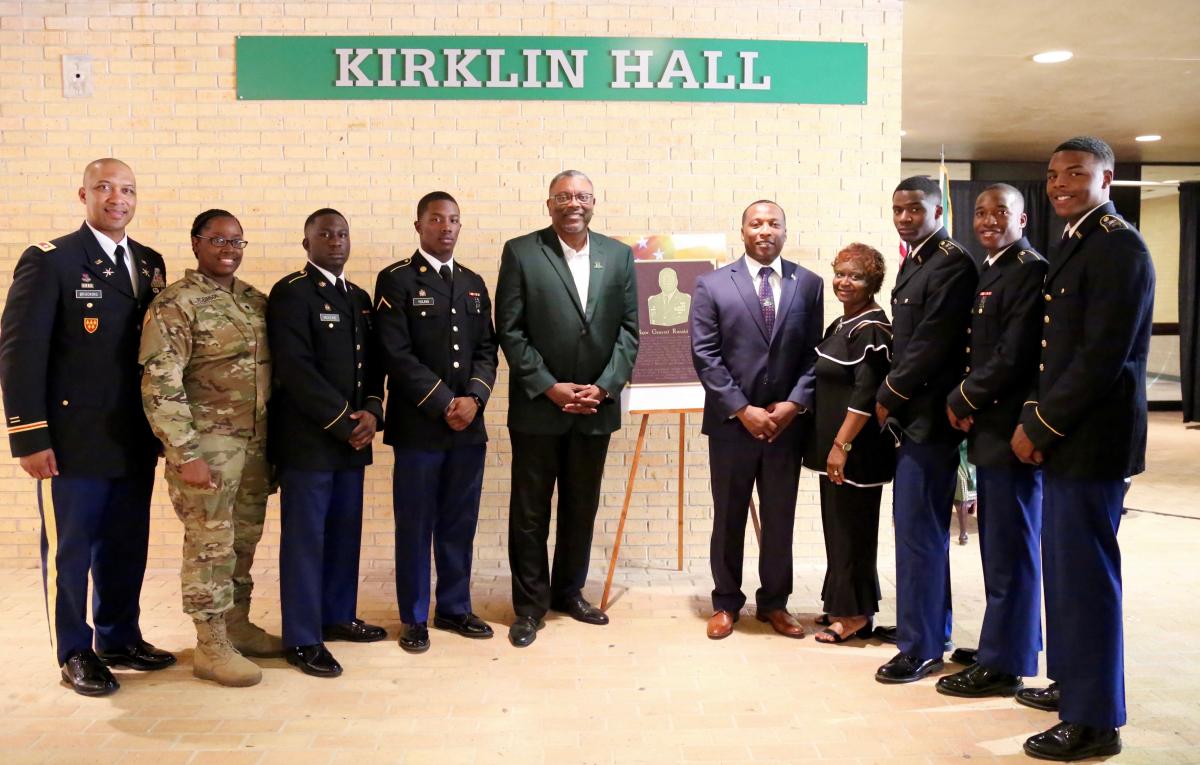 The MVSU community joined close friends and family of Kirklin for the event, which was highlighted by the unveiling of the hall’s exterior signage and a mockup of the plaque that features a photo of Kirklin and his biography.

Located in MVSU’s O.P. Lowe Teacher Education Building, Kirklin Hall is where Kirklin began his extensive military career as a cadet more than 30 years ago, working his way up to Major General—one of the military’s highest posts.

“Kirklin was an outstanding student and cadet. It was easy for us to train him because he had some training at home,” recalled Kirklin’s former instructor and mentor First Sergeant Al Hines during the ceremony. “He was obedient, dedicated and disciplined, so our job was that much easier with him. I consider it an esteemed and distinct pleasure to have had Kirklin as a student.”

MVSU President Dr. Jerryl Briggs said that Kirklin is the epitome of the greatness that a Valley graduate can achieve.

“The greatness of our University is our students—both current and former. I’m overjoyed by this opportunity to honor one of Valley’s own,” said Briggs. “When our students see the name of this hall, hopefully they’ll want to know why, and we’ll be able to share and show them all the great things that Major General Kirklin has accomplished in his life.”

Briggs noted his ties to Kirklin go beyond their love for MVSU.

A native of Lexington, Miss., Kirklin said that it was MVSU that chose him as a student more than 30 years ago.

“I walked through this building many times really not knowing what the future held,” he said. “No words can express my gratitude for what’s happening here today and what this dedication means to me, but I think what matters most is what it means to the people who invested in me.”

For the young students and future leaders to see someone with a background similar to theirs have a moment like this and to know that MVSU can lay the foundation for them to follow at some point.

“Performance is important—no matter what you’re doing, the end results are what really matter,” he said. “You have to be prepared, dedicated and persistent in what you do, and the last thing I’ve learned as a leader is that you really have to care for people.”

Kirklin said he never imagined that he would become a major general, a ranking that less than one percent of military officers achieve.

“I’m living proof that anything is possible for those of you following me. Don’t give up and remain dedicated to what you’re doing,” he said.

He also used the opportunity to thank those who have supported him over the years.

Many people who have been successful in life have had a really good cheer team behind them. They’re the people who are important in the end when all of this is said and done,” he said.

One of the things I’ve learned lately is that when the bright lights are no longer shining on you and the spot light is off, they will come be your light. So, I want to thank the hundreds of people who have helped me on this journey.”

Kirklin said he’s humbled by the legacy that Kirklin Hall will have for generations to come.

“I want to thank Mississippi Valley State University for choosing me and giving me a chance. I know that this University will continue to change lives for young men and women years after I’m gone,” he said.