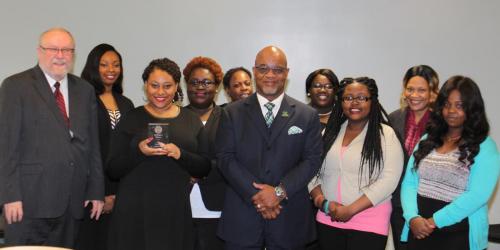 “The team compiled a respectable record on their eight ballots over four rounds narrowly losing three ballots that would have placed them in the opening round of national championship competition,” said Dr. Larry Chappell, the team’s advisor. “ The competitiveness of the team is quite an accomplishment considering the number of first-year and sophomore students on the team. All of the team will be returning next year with the exception of one graduating senior.”

Jasmine Murphy, sophomore pre-law/legal studies and English double major from Itta Bena, Miss., won an outstanding witness award for the defense for her role as Dr. Vic Fogel, an expert on journalism. She also received strong scores and rankings for a separate role as psychologist Cary Kramer on the plaintiff side. This was her second outstanding witness award in less than a month.

“Playing an expert witness is quite challenging since the witness must learn credentials; tests and methods; supporting evidence; and major conclusions for complicated professional studies, he said. “To testify on both sides as an expert is a grueling challenge that Ms. Murphy met well.”

“We want to especially thank John McCall, senior graphic designer with Communications and Marketing at MVSU, for preparing the demonstrative aids that students used in their testimony; and Dr. John Bradford, assistant professor of sociology, who developed the charts that were used in testimony during the trials.