Corterrius “DaCakeGoat” Allen started his journey and love of making and designing cakes with a $35 baking kit and two cupcake pans that his mom, Jacquelyn Allen, purchased.

He made his first cake for a friend, and while he says, "the cake was ugly," his friend loved it and told him, “It was delicious.”

Fast forward a couple of years, and the 20-year-old Mississippi Valley State University Social Work major has come a long way since that $35 baking kit.

Allen now has a thriving business, and he is excited to announce that he will be competing in Halloween Wars on Food Network, which will air on Sunday, September 19 at 9 p.m. (EST), 8 p.m. (CST). Allen will be teamed up with Holly Webster from Las Vegas, Nevada, and Amy Strickland from Orlando, Fla. 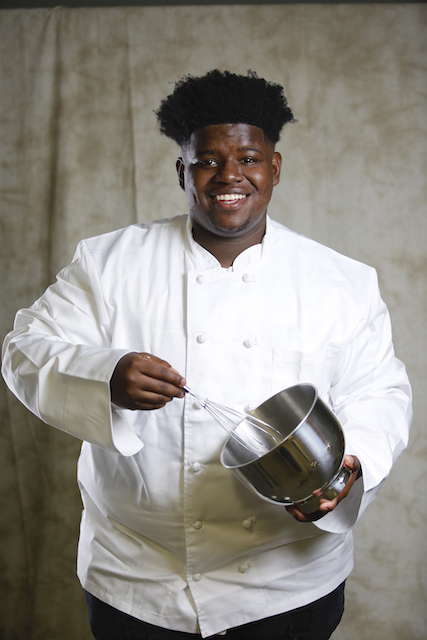 "I was on google searching for an opportunity to test my skills. I felt I was getting better, and I wanted to find a competition that would challenge me. I found a company called Super Delicious and reached out to them. They emailed me that I could apply for Halloween Wars. So I signed up, did an interview and a call sometime later that I made it, and they flew me out," said Allen.

The Shelby native said walking into the competition was a nervous experience, but he allowed his personality to speak for him.

"Walking in seeing all the cake decorators made me nervous in the beginning, but I knew it would give me the chance to learn from these seasoned bakers while also helping me measure where my skills are,” Allen said.

Additionally, he explained that he was the youngest person in the competition.

A native of Shelby, Miss., Allen said his love of designing cakes just came out of nowhere. "My senior year, I worked at a bakery in Cleveland called "The Sweetery," While working, I was making buttercream, washing dishes, and baking, but I never cake decorated," he explained.

Following graduation, Allen attended Coahoma Community College, and it was during his time there when he started to explore baking on an entirely different level.

"There is something calming about baking and designing cakes. I love the designs and coming up with different levels of creativity. One day I want to own a cake studio," said Allen.

“My motto is that, 'Every day is somebody's birthday.' That means every morning, I have the opportunity to help place a smile on someone’s face and share in their happiness,” he explained.

In his short time in the field, Allen said he had experienced criticism, but he takes every mean comment and uses it for positive outcomes.

“I want every person to learn how to take the criticism and use it for motivation. It would be best if you always believed in yourself and never be satisfied because it can always be better,” Allen said. I want people to be fine with standing out and being themselves.”

As a social work major, Allen believes that much of what he learns inspires him to do other things with baking.

"I love people, and I love making kids smile. I want to use my platform to help kids by providing cakes to children with special needs," he added.