Organizers felt the decision to focus on Women in Blues for the 7th Annual B.B. King Day Symposium is timely and significant.

"Although the previous symposia included "nods" to women who were instrumental in the success of many male blues singers or were blues performers themselves, the primary focus was always on male performers," said Margaret Clark, BB King Day Symposium committee chair. 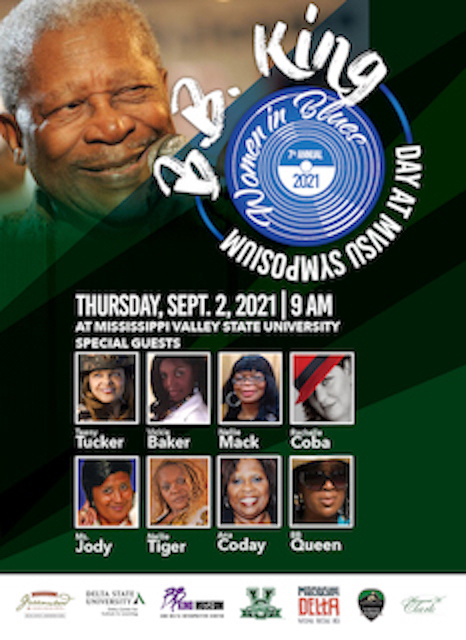 Another lecture will be hosted by the Department of Mass Communications in the O.P. Lowe Education Building. Dr. Carolyn Gordon will host the lecture, and Baker will serve as the speaker.

Wednesday will culminate with a Celebration of Gospel event at 2 p.m. featuring the MVSU Choir in collaboration with Coahoma Community College Concert Choir in the W.A. Butts Social Science Building.

The symposium will be held from 9 a.m. – 3:30 p.m. Thursday in the W.A. Butts Social Science Building in the Carver A. Randle Auditorium. The event will be filled with panel discussions and live performances.

The night will climax with the Symposium's Great Blues Showcase from 7-9 p.m. at the B.B. King Museum and Delta Interpretative Center in Indianola, Miss.

This year's symposium will explore the impact of Women on all music genres but especially on the blues. Bessie Smith was a blues singer renowned during the jazz age. One of the earliest African American professional singers, Ma Rainey, was first among the first generation of blues singers to record. Etta James performed in various genres. Koko Taylor is/was a rhythm and blues and soul blues singer. Other noted female singers from the early days include Sister Rosetta Tharp, Big Mama Thornton, Clara Smith "Queen of the Moaners," and the list goes on and on.

Understanding the legacy of music in any culture depends on the next generation. Denise LaSalle, Queen of Blues, was a participant in the First Annual B. B. King Day.

"We want to not only honor these female blues performers but also inspire more African American young people, especially females, to embrace the entire musical spectrum that comprises a critical component of our culture," Clark added.